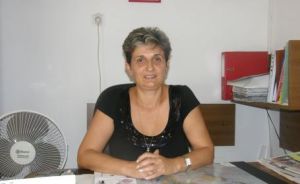 Since 24. August in Hungerstrike. The teacher Cristina Anghel.

Cristina Anghel is the name of a Romanian teacher on hunger strike for 64 days. She refuse to eat since August 24, protesting against the government decision of wage cut. There were a few politician’s declarations urging her to end the protest and not to put her life in danger no more. What these politicians really don’t understand is that their actions are putting her life in danger as their decisions are putting every wage addicted person’s life in danger. With a salary that is less then 300 Euros it is impossible to live. That is the reason why she is accusing the officials for ignoring her and treating her as if she did not exist.

Cristina Anghel is 55 years old, she’s married and she have a daughter. She was admitted in a hospital and is now under medical supervision. She is decided not to end her protest until politicians will understand that people’s life conditions, those conditions caused by government incompetence and cynism, lead people to desperate solutions. Yet Cristina Anghel does not want to commit suicide as one of her colleague – Maria Cracoveanu – did last month, realising she could not live on the reduced wage.

Cristina Anghel’s declarations directly targeting government and the lack of emphaty and humanity of the politicians that are refusing systematically to accept that people’s needs have reached the point where is all about surviving.

“I will not stop until the politicians understand that Romania is our country and we want it the way it should be” she declared to the press. The Romanian president – Traian Basescu declared also to the press that he didn’t heard about the teacher’s hunger strike and that he did not know anything about.